With the participation of a large number of Mayors and local officials and reps, the conference, organized by KEDE, was successfully concluded today. The objective was to exchange information on the PRODESA project, which concerns innovative funding for the energy efficiency of municipal buildings and street lighting. Diffusing experience will contribute to rapidly utilizing funding tools in order for the “green” energy to move forward in every Municipality. The project was implemented on seven Municipalities in Attica and is fully funded by the European Commission. These are : Alimos (coordinator partner), Agios Dimitrios, Glyfada, Vari-Voula-Vouliagmeni, Agioi Anargyroi-Kamatero, Palaio Faliro and Amaroussio.

The seven-hour long conference was chaired by the Secretary General of KEDE, Dimitris Kafantaris.

Dimitris Papastergiou, President of KEDE : The Local Government visualizes and creates the “green” future of our cities

The President of KEDE, in his opening address, pointed out the new role that Local Government has started to play in the country’s development. Using projects such as PRODESA as the basis for innovative funding, Local Government changes the energy logic towards a sustainable future with buildings, neighborhoods, cities having a positive energy imprint. He also said, that the new funding tools (ANTONIS TRITSIS Program, the Recovery Fund and the National Strategic Development Program) provide the Local Government with the unique opportunity to mature and realize projects which will contribute to energy saving in municipal buildings and the ability to aid people in need. He also referred to the production of “green” energy consumed locally and the challenge of electromobility which Municipalities seem to meet successfully in cooperation with the S.G. for Energy and Natural Resources Alexandra Sdoukou.

Stelios Petsas, Deputy Minister of the Interior : We are links in the same chain – We are protecting the environment, our home.

Referring to the resources for energy projects, the Deputy Minister spoke of the ANTONIS TRITSIS program which gives Municipalities and Regions the ability to implement high-priority projects which enhance the citizens’ every-day life. Apart from the urban revitalization projects which have a strong environmental imprint on the local societies and the sustainable development projects, he specifically mentioned the AT03 Invitation of the ANTONIS TRITSIS program for making good use of the Renewable Energy Sources, especially for the water and sewage infrastructure, replacing the existent electromechanical equipment with small scale photovoltaics. So far, 55 Municipalities have submitted proposals to the AT03 Invitation, amounting to 175 million euros. Three proposals have already been accepted, 6,2 million euros in total, two proposals from the Municipalities of Kileler and Emmanouil Pappa have been positively assessed by the committee and will be accepted within the next few days, along with other projects, especially from the Municipal Water Supply Enterprises. He also stressed the possibility of synergies with other funding tools, such as ESPA (NSDP) and the Recovery Fund.

The Secretary referred to the planning for the support of the municipalities’ passage to the new energy era. Every available funding tool is being used while the institution of “ενεργειακών υπεύθυνων των κτιρίων» and energy services from the ESCOs is being promoted for the improvement of energy efficiency in public and municipal buildings, the use of Renewable Energy Sources for the reduction of energy costs and, of course, electromobility everywhere!!!

The Ministry for the Environment has 6 billion euro to spend for the green pillar, of which 2,5 billion euro are headed for energy upgrade and spatial reform. The 1,7 Billion is destined to the “EXOIKONOMO” program, for energy saving in houses, public buildings and business buildings. The “ILEKTRA” program is funded by the EIB with the amount of 500 million euro, which can be leveraged to 1 billion euro. Efforts are made for the immediate pre-publication of the invitation. She pointed out that the objective is the faster maturation of the municipalities’ surveys. She urged the mayors to make use of the “ELENA” program which provides technical assistance for the preparation of energy efficiency projects.

The S.G. spoke of the great opportunity, that the funding instruments on energy reform, present for local authorities , so that it can become stronger and more efficient for the people.

“The future has already started and the Local Government has proven its pioneering nature. The challenge is big and the Ministry of the Interior will always be on its side”.

Vasiliki Sita, Director of Energy Policy and Efficiency of the Ministry for the Environment:

Mrs. Sita referred on the new funding instruments for the accomplishment of ambitious energy and climate objectives, pointing out that the enhancement of public buildings via the Energy Efficiency Agreements and Public Private Partnerships will be the basic policy in the next period.

Mr. Athanasiou said that works have taken place and proceed to the right direction. The PRODESA project is not an easy one and the Municipalities’ efforts are not self-evident.  Both economic and human resources are necessary to accomplish this dynamic, evolving effort. As for the objectives for the new EU agenda for climate and environment, he said that they cannot be easily achieved without the contribution of energy efficiency projects on buildings.

Stamatis Dimitris, President of the Administrative Board of Loans and Deposits Fund :

Mr Stamatis underlined that the fund “will stand by the local authorities, providing new financial instruments such as the ILEKTRA Program, concerning energy upgrade on municipal buildings while in parallel the aim is to create a special account for the local authorities to support their liquidity linked to their obligations deriving from expropriations. This is a clear indicator of hour intention to become the local governance bank and be the local authorities supporter in Greece”.

Mr. Beglitis gave the framework of the financial instruments used by the Development Bank of the Council of Europe to finance programs and projects from both the central government bodies and the regional and local self governance bodies. The bank is supporting, since 2008, projects referring to environmental protection, is financing infrastructure projects to face the impact of  natural disasters and projects on energy transmission and energy efficiency while it has already issued an environmental bond. In 2015 it has created a special Fund for Immigrants and Refugees that is financing related projects by providing the required resources to municipalities and regions. In 2017 the bank has also formed the financial instrument of “Inter-domain Loan for Social Infrastructures” to finance local authorities. In 2020 the it has given more than 6 billion euros in loans through 56 programs to 24 member states of the Council of Europe.  During the same period it has worked in cooperation with the European Development Bank to issue a new instrument aiming to support local authorities using EU resources.

Mr. Verelis has presented two main instruments of the Bank. The first one, is being implemented in pilot basis, in cooperation with the European Development Bank and the European Commission aiming to help municipalities liquidity via LIFE Programme Projects on energy efficiency. The second one is the Infrastructure Fund, under the aegis of the Ministry of Development, that is finacing medium scale insfrastructure projects, via the Public Investments Program and the ESPA (NSRF-National Strategic Reference Framework). These investments are focusing in environmental protection, energy saving and urban development, having a strong socioeconomic impact.

Prebelic Vladimir, Spokesperson of the Council of Europe (CoE) on Climate Change and Environment :

Mr Prebilic firstly referred to the work that has been done b y the partners within the framework of PRODESA Project and addressed special congratulations to the municipalities. Referring to the challenge of overcoming Climate Change issues, he underlined that all level of governance need to be involved and use the necessary financial instruments available to cover the needs of the cities. “Our sustainable future is coming through our cities and of course we need to help local self governance to carry this burden. This is also the Congress of Local and Regional Authorities’ goal towards the transmission of the municipalities to the energy efficiency” stressed out the CoE representative.

Mr. Zapfel began his speech by congratulating the municipalities of PRODESA Project for being an example for all municipalities in Greece and Europe. The main goal of the Project was to seek for new innovative financing instruments in municipal level in South Attica and create an exceptional example of how the difficulties and challenges can be faced and overcome in order to finance projects of sustainable development. PRODESA Project is aiming at supporting such projects and getting all the necessary know how in technical, economic and legal level in order to help these projects mature in practice and make them more attractive to private financing.

Mrs Rusconi referred to European Energy Efficiency Fund as an investing tool that supports municipalities and cities for the implementation of intelligent solutions while providing them with the necessary technical assistance. The Fund has invested on 16 cities in 9 european countries about 200 million euros in order to eliminate the CO2 emissions up to 64% average. It is also supporting multiple financing to help the pandemic effects, while supports projects on energy efficiency, municipal buildings renovation and infrastructures and the use of renewable energy resources. In this respect the public and private partnerships remain the main financing method. In order to receive such a support (5 to 25 million euros),  the perquisite is for the project to supply a 20 % average on energy saving. 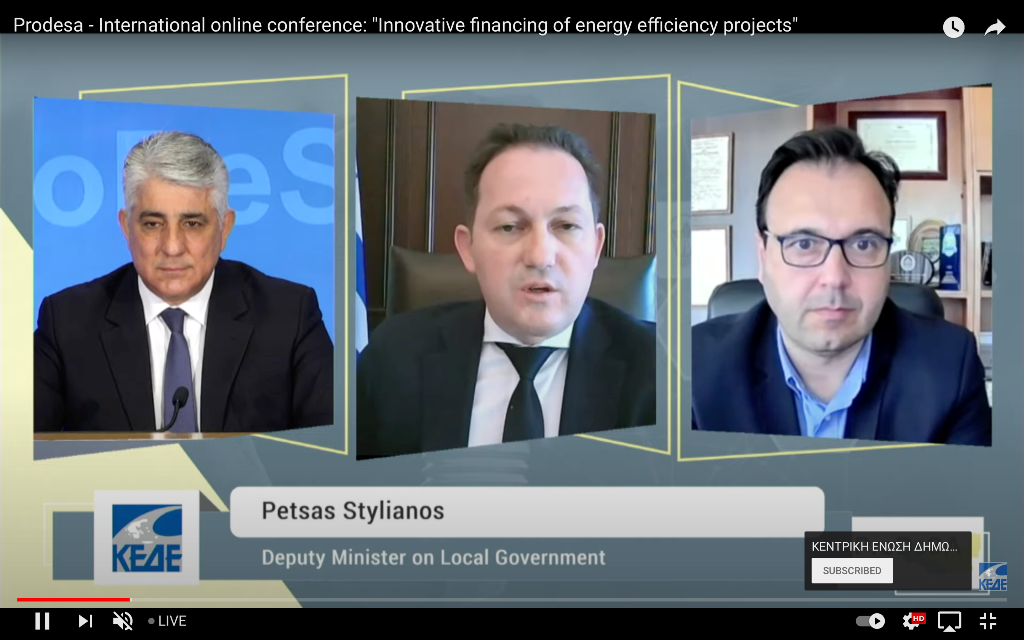 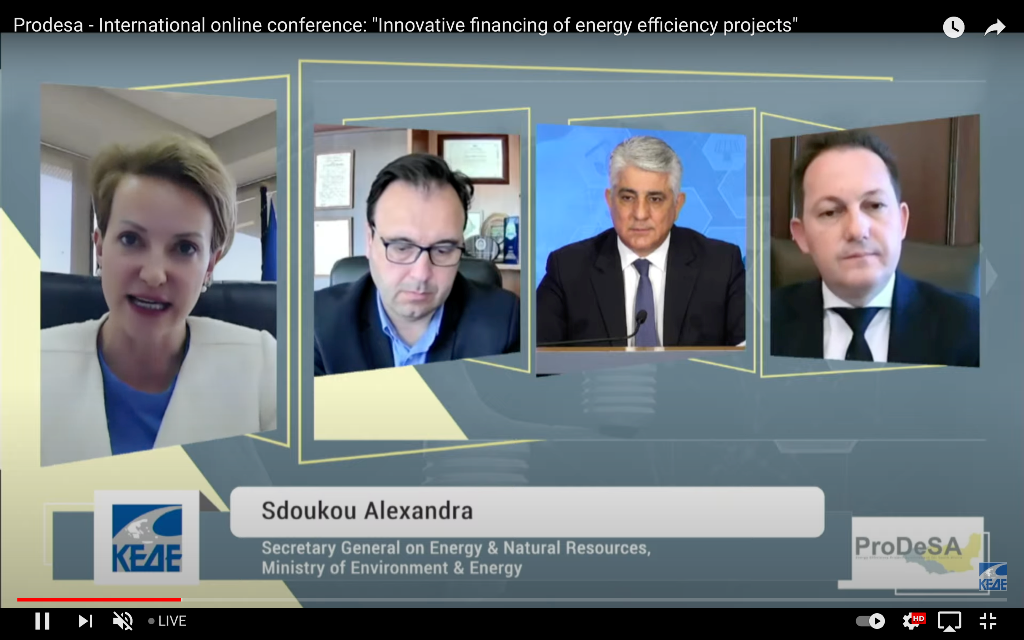 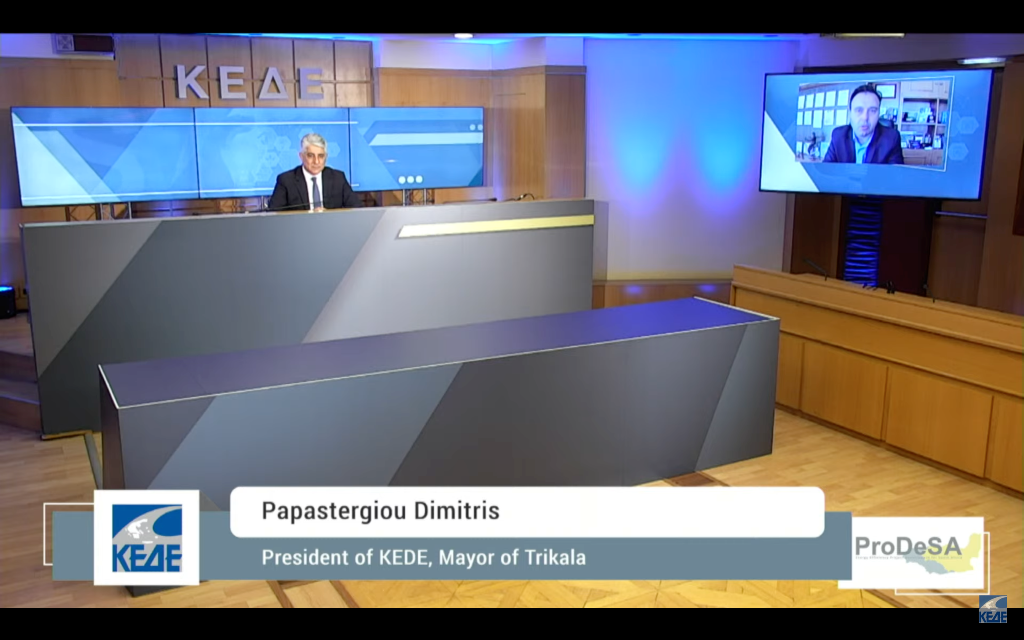 Meeting between the President of the Central Union of Municipalities of Greece (KEDE), Mr. Dimitris Papastergiou and the German Deputy Minister of Economic Cooperation and Development, Mr. Norbert Barthle

Mr Dimitris Papastergiou, President, KEDE: We are moving forward towards the institutional upgrade of the…

Elias Mosialos answers the questions of the local authorities about the vaccination and how it can contribute to the treatment of the fourth wave of the pandemic.

Online Initiative of the President of KEDE D. Papastergiou, As to inform the greek Mayors,…

Statement of the Mayor of Trikala and President of the Central Union of Greek Municipalities D. Papastergiou for the participation of Local Authorities in the national effort to strengthen the vaccination against covid-19.

With the staff and resources we had, but also taking advantage of the surplus of…

Check your inbox for an email confirming your subscription. If you do not find it in your Inbox, check your spam folder.